President-elect Joe Biden on Monday received his second Covid-19 shot and said that getting vaccines into people’s arms would be a “number one priority” for his incoming administration.

It comes as vaccine rollout has faltered badly in the world’s hardest-hit country, where some 375,000 people have died from the coronavirus and about 3,000 more are dying every day.

Some 25.5 million first doses of Covid vaccines have been shipped out to hospitals, clinics and nursing homes across the country, but only around 9 million have been injected, according to official data.

The 78-year-old incoming president arrived at the Christiana Hospital in Newark, Delaware in the early afternoon, removed his blazer, and thanked the nurse who injected his left arm with the second dose of the Pfizer vaccine.

“My number one priority is getting vaccine in people’s arms, like we just did today, as rapidly as we can,” he told reporters, adding that he would be holding a virtual meeting with his coronavirus team later on, and announcing a new strategy on Thursday. 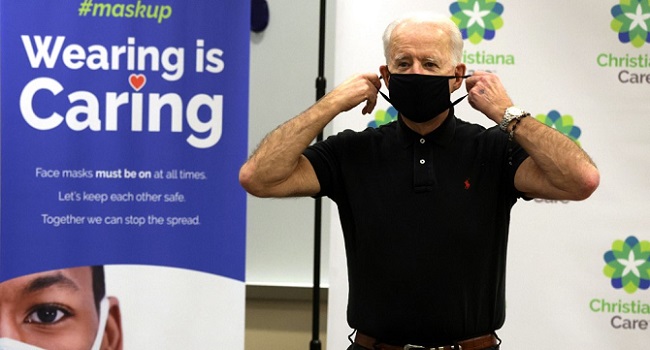 “Three to four thousand people a day dying is just beyond the pale… it’s wrong, and we can do a lot to change it.”

He emphasized the need to continue social distancing and mask wearing, and added that he was “appalled” that Republican lawmakers refused to wear masks when they were forced into a security lockdown during last week’s Capitol attack by supporters of President Donald Trump.

“I think it’s irresponsible. It’s not a political issue, it’s an issue of public safety.”

Biden has also pledged to push for more direct stimulus checks to taxpayers, and said he was speaking with Republican lawmakers about moving on a second package “sooner rather than later.”

Religious Crisis Threat: DSS Only Out To Create Fear, Panic — CAN

Mexican President Says He Has COVID-19

Biden, Trudeau To Meet Next Month