Joseph Omu, a Karate national champion, says his father enrolled him and his brother in Karate at a tender age as a “weapon” for self-defence from bullies.

Concise News reports that Omu, champion in the karate -84kg category, told NAN on Tuesday in Lagos that ironically, the sport had helped to improve his self-discipline and independent lifestyle.

“Karate for me has been a journey I started since childhood. My brother and I got enrolled by our dad into a karate school at National Stadium, Surulere, Lagos in the late 1990s.

“He did that so that we could defend ourselves from bullies; there, we learnt how to back out from a fight.

“But funny enough, Karate is a way of life; it teaches you a lot about life, it’s like a life preparing process.

“Martial art is one of the best sports in the world because it teaches self-discipline, tolerance, patience, self-defence and independence,” he said.

On his victory at the Nasarawa Open Championships held in April, Omu, who expressed happiness that the victory qualified him for the African Games, however, noted that he still had one final match in the closed camp.

“Winning in Nasarrawa qualified me but I still have a final battle in a closed camp trial which, only God knows when it’s going to be,” he said.

“But for the meantime, I still want to maintain my shape and form as the champion and represent Nigeria in any international championship if need be.”

Furthermore, Omu made known his displeasure with Nigeria’s failure to qualify for the 2020 Tokyo Olympic Games.

He said, “Karate in the Olympic is a big blessing and achievement for all of us as karatekas though it was not easy getting in because the constitution was bent to fit in the Olympics.

“Well, to qualify for the Olympics, you have to acquire a lot of points and how do you get these points? You must attend karate leagues and win medals each time you do so.

“And we tried to keep up with it but couldn’t due to financial issues. Like I said earlier, we need a good administrative board with good future plans.

“So, basically, nobody in Nigerian karate can qualify for Tokyo 2020.”

He added that Karate was a global sport for different countries because of the immense love for it.

Rivers: Amaechi Opens Up On ‘Ongoing War’ With Wike 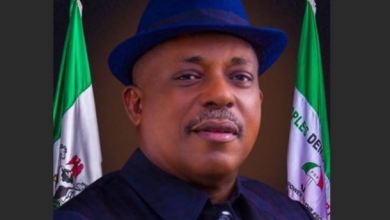 JUST IN: Blessing Okagbare Suspended From Tokyo Olympics For Doping